False Prophecise of David Wilkerson on the End Times

The following are a collection of quotes from David Wilkerson's newsletters that indicate he has been giving false prophecies about the end times. I used to subscribe to his newsletters so I have the original hard copies plus the coverletters that came with them, which also contained prophecies.

David Wilkerson claims to not be a prophet, yet he even says in his newsletters he was given a prophetic message from the Lord for us, and he keeps giving them. Regardless of whether he claims to be a prophet or not, his prophecies are not coming true, as will be shown below.

False Prophecies of No More Gospel on Television Networks by 1999, etc.

"No more gospel Television Networks by 1999". . . "Right now I sense in my spirit that in less that 5 years there will be no more so-called gospel television networks. They will all fall into bankruptcy and absolute ruin." (From David Wilkerson's newsletter "In the Solomon Church" 12-19-94. I have quoted Wilkerson from a hard copy of this newsletter which can be found here: worldchallenge.org/newsletter/1994/the-solomon-church.)

This prophecy didn't come true so it can't be God who was speaking to Wilkerson.

Following is most of the prophecy from the September 7, 1992 coverletter:

"I have had recurring visions of over 1,000 fires burning at one time here in New York city. I am convinced RACE RIOTS WILL SOON EXPLODE! New York City is right now a powder keg-ready to blow! — federal and State Welfare cutbacks will be the spark that ignites the fuse. NEXT YEAR, New York City could have over 100,000 angry men on the streets, enraged because they have been cut off from benefits. federal troops will have to move in to restore order. . . New York City will have tanks running down its avenues. Businesses will virtually come to a standstill. It could be months before order is restored. Churches will be closed for a season because it will be too dangerous to travel about. Fires will rage everywhere." 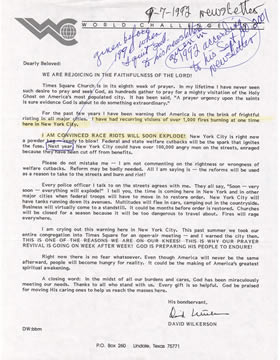 The original September 7, 1992 coverletter has been scanned and posted here. Notice where I circled the words "next year". There was no date of when the coverletter was written however I later figured out the date of this prophecy from other documents.

Scroll about 4/5ths of the way down the page of the newsletter to the sub heading of: "A Prophetic Warning to New York City" to see the summary from the September prophecy in 1992 and compare what I posted in the image above to the newsletter.

In the original prophecy David Wilkerson said this would happen the NEXT YEAR. 1992 + 1 = 1993. The following contradictions may be why it was removed.

"messages have flooded our ministry offices, asking, 'Was the terrorist attack on September 11, the calamity you were prophesying back in 1992? No, not at all. What I saw coming will be much more severe. Indeed, if America rejects God's call to turn back to him, we'll face the same judgments Israel faced. And they will hit not only New York but every region in the country. Even the heartland won't be spared. The nation's economy will collapse, and violence will erupt. Fires will consume our cities, and tanks will rumble through the streets."

Did David Wilkerson forget that in 1992 he said that this calamity would befall NY that VERY NEXT YEAR in 1993? Now he is claiming that it is still coming.

False Prophecy of Financial Crash in May 1, 2000

Financial Crash in 2000: "For the last two years I have been crying aloud, warning all who would hear that America is receiving her last call and that judgment is at the door. I did not say this was the end of the nation, but the last call before a financial crash."

"I am writing this letter to you on Saturday, April 15, 2000. I have on my desk the headlines in yesterday's paper: "BLACK FRIDAY - BIGGEST ONE-DAY DROP IN HISTORY." The Dow fell 618 points - the Nasdaq fell 355. I do not know what is coming in the next sixty days. If the market bounces back, I can assure you it will be temporary. THE CRASH IS INEVITABLE - NOTHING CAN STOP IT." (David Wilkerson's prophecy from his cover letter dated: May 1, 2000.)

David Wilkerson admitted this was a false prophecy due to market reaching record high by May 22, 2000 (7 days later). From a cover letter dated May 22, 2000 when asked about his warning that the stock market was going to crash, when it didn't, Wilkerson states:

"In prayer, I have told the Lord I am ready at any time to confess I am wrong - that I must have spoken from my own fears or that I have spoken unadvisedly. Recently, when the market reached record highs, I wondered if those calling me a false prophet were right."

Please notice David Wilkerson calls himself a prophet here (he denied it in his previous cover letter). And yet a few sentences later, in regards to his error, he says,:

"No matter what others think, I cannot shake off the urgency of the Holy Spirit to warn God's people. . . . I hear God's still, small voice saying, 'It is coming. It will happen suddenly. Forget the criticism -- warn the people.' "

So what we have in one sentence Wilkerson refutes in another, i.e., previously he said, being as the stock marked did not fail he must have spoken from his own fears (and thus not from God) and thus he was in error. But a few sentences later he says it's still coming. How many other prophets sing this same tune with every false prophecy? (he admits other errors in this same newsletter re divorce and starting church homes).

Wilkerson admitted his mistakes, however:

Wilkerson Still Claims he is a Prophet of God

Here is another article by David Wilkerson, from his very own ministry, where the very first words state, "I bring you a prophetic word from the Lord.", i.e., he is speaking as a prophet. (there is no date on the newsletter but looks like it was published in early 2000. www.tscpulpitseries.org/english/undated/tsrczion.html).

What does scripture say about false prophets?

"If what a prophet proclaims in the name of the Lord does not take place or come true, that is a message the Lord has NOT spoken. That prophet has spoken presumptuously. Do not be afraid of him." (Deut. 18:22)

How many false prophecies should a real prophet or teacher of the Word be allowed? Paul told the Thessalonians:

"For our exhortation does not come from error or impurity or by way of deceit; but just as we have been approved by God to be entrusted with the gospel, so we speak, not as pleasing men but God, who examines our hearts." (1 Thess. 2:3)

Please notice that Paul claimed that his teachings were not in error, or in an attempt to deceive or were they in any way impure. And yet today's "prophets," and their followers claim that error is ok. It really makes you wonder which bible they are reading.

David Wilkerson is a false Prophet. There are many other false prophecies in David Wilkerson's newsletters about the end times -- this is only a small sampling.

David Wilkerson is also a False Teacher. See a critique of Wilkerson's false teachings comparing what he says with scripture.

Also see an article by James Sundquist on this website called, David Wilkerson's River of Life Vision exposed. Sundquist exposes Wilkerson's Vision as a fraud because it is scripturally inaccurate and gives adequate scriptures to prove his point and also exposes Wilkerson's false theory that the Church has replaced Isreal, i.e., Replacement Theology.

The Deception in the Church's False Prophets web site has a plethora of articles exposing false prophets.