What does the Bible say about Apostles Today?

This article will examine scripture to see what are the requirements of being an apostle, who built the foundation of the Church, who was the last apostle and if there are any true apostles today.

The Scriptural requirements to be an Apostle:

"Therefore it is necessary to choose one of the men who have been with us the whole time the Lord Jesus went in and out among us, beginning from John's baptism to the time when Jesus was taken up from us. For one of these must become A WITNESS WITH US OF HIS RESURRECTION." Acts 1:21-26

Therefore, ALLLLLLL the apostles were to be eye witnesses to Christ and his Resurrection and they repeatedly stated this in their writings (see 1 John 1:1,3 and Peter 1:16, Luke 1:1-2).

The same thing applies to our court rooms today, eye witnesses can provide proof that an event really happened. Hearsay is not admisible evidence.

Who Was the Last Apostle?

"Then he [Christ] appeared to James, then to ALLLLL the apostles, and LAST of all he appeared to me also, as to one abnormally born." 1 Cor. 15:8

Please notice Paul stated he was the LAST apostle to witness the risen Christ. Most so-called "apostles" during these end times ignore Paul's writings for this reason.

How to Avoid False Apostles Today

The false apostles in our day distort the truth and seduce the Church into thinking they are holy men when they are actually savage wolves leading the sheep astray (Acts 20:29). We are instructed in 2 Peter to avoid false doctrine by RECALLING the teachings of the Apostles already established (2 Peter 1:12 ).

So, what people had already was enough to firmly establish them in the truth. This means there wouldn't be any other apostles after Paul, otherwise there wouldn't be such a great need for them to remember what he said.

"The wall of the city had twelve foundations, and on them were the names of the twelve apostles of the Lamb." Revelation 21:14

Apostles Taking Scripture out of Context 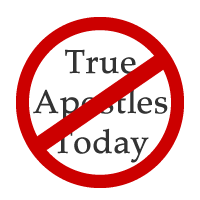 The following scripture is often used to prove that there are prophets and apostles today:

However what they fail to do is read this passage in context. If you start back in verse 7 you will see that this is talking about GIFTS, not the office.

The Church was Built on Only One FOUNDATION :

"Consequently YOU are no longer foreigners and aliens but fellow citizens with God's people and members of God's household, BUILT ON THE FOUNDATION of the Apostles and Prophets with Christ Jesus himself as the chief cornerstone." Eph 2:19-20

In the Greek Interlinear bible the word "built" is "having been built," it is in an aorist participle passive tense, i.e., this was an action completed in the past that occurred to the subject of the sentence, i.e., the Church. It is saying the Church WAS built on the foundation, not that it "IS" being built.

Is it any wonder in this time of the end when we have been promised apostasy that these self-proclaimed prognosticators are leading people OUT of the supposedly corrupt denominational churches and to ANOTHER Word (New and improved revelations supposedly from God)?

It is mostly in Prophetic driven Pentecostal/Charismatic circles where church attendance is growing. That should speak loud and clear right there. It is because of that same influence permeating a lot of Christendom that other churches are dwindling in size. Why? Because a lot of those who KNOW their scriptures see this movement as being unscriptural and they leave.

"Now the Spirit speaketh expressly, that in the latter times some shall depart from the faith, giving heed to seducing spirits, and doctrines of devils;." (1 Timothy 4:1)

Apostles MUST BE EYEWITNESSES to the Resurrected Christ and we are instructed to remember THEIR teachings. There aren't any successors to the Apostles of New Testament times because they had to be eyewitnesses. We have been WARNED about false apostles in the future who are obviously not eyewitnesses. Therefore we are NOT instructed to believe ANY of them in our day.

Any apostle today speaking new revelations is ADDING TO the Word of God that was already established, which scripture forbids (Revelation 22:18-19). When people claim that we must listen to the visions and new revelations spoken by today's "prophets" they are telling us the Scripture is insufficient for our needs which leads us to listen to men instead of God and ignore the Word of God, the Bible. This is exactly what Satan wants us to do. So, no, there are not any true apostles today!

Also see why there are No Prophets Today

Are There Still Apostles Today? written by Costi Hinn, a nephew of Benny Hinn.

Why Apostles are Not for Today from Berean Research.