The following is an analysis of a prophecy or vision reportedly experienced by Mother Teresa on her death bed. 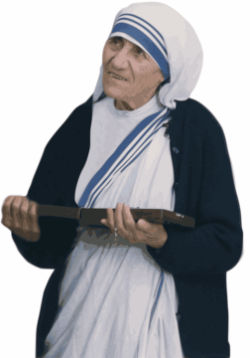 This prophecy can be seen in it's entirety at the following site:
http://www.endtimesreport.com/index_files/Mother_Theresa.htm

"The plague will break out first in Asia in August 2002. At first it will be ignored by world health authorities, but it will spread and its victims will multiply rapidly, millions and millions of poor souls. "

"As the plague rages, the true identity of the Beast of Revelation will be revealed; a creature who delights in death, pain and misery."

According to the book of Revelation The Antichrist/Beast of Revelation isn't revealed to the world till the abomination that causes desolation which is 3.5 years from beginning of the trib. We're not in the tribulation yet because the [true] Church is still here.

Also if you will read Mother Teresa's prophecy in its entirelty you will see she is referring to the 4 horsemen of the Apocalypse which is spoken of in Revelation 6. However her 4 horsemen do not ride out in the same manner as what we find in Revelation 6 which is as follows:

If you will notice she has Sword and Plague transposed.

"This man will come from Iran, and will proudly display the number 666"

"Probably"? Is this from God or not? Does God give our "probable" prophecies to his followers?

According to some of the more plausible studies of the Antichrist floating around he has to be someone the Jews can consider their messiah or they wouldn't worship him, i.e., possibly Jewish. It's very unlikely they would worship someone from a country that is their mortal enemy.

"With contemptuous ease, the Beast will assassinate Saddam Hussein early in 2003 in a murder plot involving Arab Sheikhs, and he will spread his power through Iraq and Saudi Arabia. . . War will break out in the Middle East in October 2003. It will start with the assassination of a major figure. . . This shocking event will provoke a wave of suicide attacks against the United States. . . . Like the plague, the war will escalate quickly. . . A brief, bloody, global confrontation will ensue. America will emerge victorious, but with great loss of life, and the economy in ruins. "

This sounds like Armageddon but that is supposed to be at the end of the Trib which Jesus puts a stop to before man destroys the earth.

"Enter the third Horseman, Famine." But when things are at their very worst, and the winter bites hard, the fourth Horseman makes his appearance. This rider is not 'Death' as in Revelation, but becomes 'Hope'. . . Hope will become the promise of a new message from Our Lady of Fatima. Hundreds at the Shrine will witness the Virgin predicting victory in the war, and a 1000 year Era of Peace on earth.

Here, she departs totally from scripture--instead of judgment she is promising hope. Notice there is no mention of Jesus and his coming in judgment in all of this prophecy. Just Lady of Fatima and the Virgin Mary to rescue everyone. Totally unscriptural now.

Conclusion:
This prophecy cannot be of God because it does not match up to scripture and what is worst of all it totally ignors Jesus as the reason for our hope. Mother Teresa is not only a false teacher she is now also a false prophet.