What Does the Bible say About Christians Judging Others?

I get a lot of negative comments from those who tell me "thou shalt not judge," that I should take my concerns to the person in question "privately first," as it says in Matthew 18:15. However the problem with that verse is it doesn't apply to judging other's teaching when they have published their sermons or prophecies online for everyone to see.

I am also often told to "touch not God's anointed" and that scripture says in the last days "your son's and daughters shall prophesy." These folks wrongly assume that we are to blindly accept the teachings of anyone who claims to be a "prophet" and especially those of the "anointed" class, and anyone who prophesies must certainly be a child of God. Right?

Is that really what scripture says, or have these folks bought into the Love Gospel permeating Christiandom today (forsaking doctrine for the sake of unity)? They also often take the scriptures in Matt. 7:1-5 and Romans 2:1-3 (which are cautioning us about being hypocrites) and apply it to our judging others teachings.

Let's see what scripture really says about judging the teaching of others:

Does the Bible say Believers Should Rebuke and Correct other Believers? 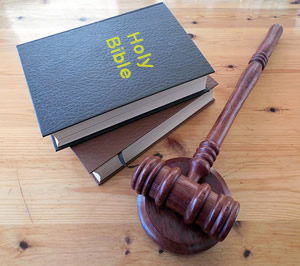 " I give you this charge [COMMAND]: Preach the Word; be prepared in season and out of season; correct, rebuke and encourage­with great patience and careful instruction." (2 Tim. 4:1-2)

"These, then, are the things you should teach. Encourage and REBUKE with all authority. Do not let anyone despise you." (Titus 2:15)

Occasionally I get letters from these "profits", claiming there were prophets in Paul's day, which supposedly implies there still are to this day. However, they must have missed this verse:

"In the past God spoke to our forefathers through the prophets at many times and in various ways, but in these last days he has spoken to us by his Son, whom he appointed heir of all things, and through whom he made the universe."; (Heb 1;1-3)

So, now God speaks to us thru the Son, via HIS Word, the Holy Bible. Christ was the last prophet that was to come that God promised to Moses (Deut 18:18).

What does scripture mean to "not touch GOD'S ANOINTED"

This verse is often mistranslated and used by false prophets and their followers to claim that no one has the right to judge others who some deem are of the "anointed" class.

However, a careful examination of this word, Strongs #5060, *naw-gah* means to touch, smite or strike (see Gen. 32:25 where God, wrestled with Jacob (later named Israel) and Touched his thigh so hard that it was wrenched and caused him to limp. So this verse is not saying we should not judge the teachings of prophets. It is saying do them no physical harm.

Also when Psalm 105:15 refers to "the anointed", it is speaking of Israel's patriarchs (the children of Jacob or Israel, see vs 6), not the Church or todays "Gentile" prophets.

Are we Supposed to Avoid Those Teaching False Doctrine?

" BE ON YOUR GUARD against the yeast (teachings leading to a works salvation) of the Pharisees and Sadducees." (Matt. 16: 6,12)

Almost all of the false teachers or false prophets judged on this site are teaching salvation by works, that one must be baptized to be saved, etc., etc.,

Are Those who Teach a False Gospel Condemned?

" But even if we or an angel from heaven should preach A GOSPEL OTHER THAN THE ONE WE PREACHED TO YOU, let him be eternally CONDEMNED! (Gal. 1:8).

Are we supposed to Judge the teachings of those who claim to be Christians?

Those false "profits" often write me and say, "Don't Judge them that's for our Father in Heaven." However, once again they haven't read the Word that tells us to not only examine all bible teachers like good Bureans, but also expell the wicked (includes False Prophets and False Teachers) from among us:

I find it very interesting that it is mostly False Prophets and False Teachers who are the ones who push the false notion that we're not to judge others! And their blind followers swallow it line and sinker, because they haven't studied the Word to see if that is true.

Can we Mix Works with Grace?

"So too, at the present time there is a remnant chosen by grace. And if by grace, then is it no longer by works: if it were, grace would no longer be grace." (Rom. 11:5,6)

Did Jesus Rebuke his Own Disciples?

"Later Jesus appeared to the Eleven as they were eating; he REBUKED them for their lack of faith and their stubborn refusal to believe those who had seen him after he had risen ." (Mark 16:14)

Are Those who Preach a Works Salvation Godless Men?

"For certain men whose condemnation was written about long ago have secretly slipped in among you. They are godless men, who change the grace of our God into a license for immorality and deny Jesus Christ our only Sovereign and Lord." (Jude 1:3)

Most of the false prophets and teachers mentioned on this site preach Grace + Works, which is not Grace, and deny Jesus as Lord, urging you to follow what they say instead of what Scripture clearly spells out.

Are we Supposed to be Good Bereans and Judge the Teachings of Others?

“These [the Bereans] were more noble than those in Thessalonica, in that they received the word with all readiness of mind, and searched the scriptures daily, whether those things were so.” (Acts 17: 10-11)

So, the Bereans didn't just take what Apostle Paul said, they searched the Scriptures daily to see if what he said was true.

So, yes, we are supposed to check the Bible to see if what others are teaching is scriptural, and if not, then avoid them. It's even ok to set up a website to judge what they say and point out their errors for others to see.

Other Resources on Judging Others

Does the Bible Tell Christians to Judge Not?

Here is a video exposing Benny Hinn and others for claiming you should not touch, or judge, the anointed and the scriptures they falsely use to support their claims to forbid judging false teachers and so-called prophets.